This late 16th century Brussels historical tapestry is woven in polychromatic dyed wool (with silk highlights) depicting Sophonisba surrendering herself and her treasures to Massinissa. Massinissa, a Numidian general and prince, overcame Ca …

This late 16th century Brussels historical tapestry is woven in polychromatic dyed wool (with silk highlights) depicting Sophonisba surrendering herself and her treasures to Massinissa. Massinissa, a Numidian general and prince, overcame Carthage in 203 B.C. during the Second Punic War. Then-King of Numidia, Syphaxm, had given into his Carthaginian sympathies on the account of his wife Sophonisba, daughter of a Carthaginian general. Massinissa was sent to dispatch of Syphax, and having done so, was made King in his stead. Sophonisba then went to him to appeal (as shown here); he agreed to marry her and not turn her over to the Romans. This was met with derision on behalf of the Romans; Massinissa then sent Sophonisba a goblet of poison, saying that while the Romans prevented him from acting as her husband, he would not let the Romans take her. She drank the poison and died to save herself.


By the early 16th century, the Netherlands was one of the unrivaled centres of tapestry production in Europe, with the majority of industry concentrated in Brussels (the kingdom of Belgium seceded from the Netherlands in 1830). Tapestry manufacturing was a highly organized and standardized business involving fine artists, weaver's guilds, large financiers, dealers and royal commissions. In addition to symbols of wealth and prestige, tapestries served functional purposes such as providing insulation for castle walls, covering openings and providing privacy in bedrooms. They were also regarded as valuable spoils of war.


Bottom 12 inches of the tapestry appears to have been rejoined. Either a section was removed and the piece was made shorter or it may have been damaged and replaced with the bottom of another tapestry. The date of this modification is unknown.

There are no reviews yet.

Only logged in customers who have purchased this product may leave a review. 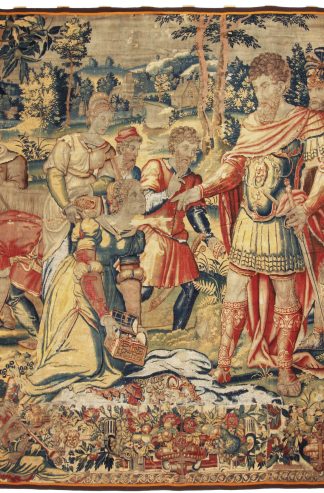